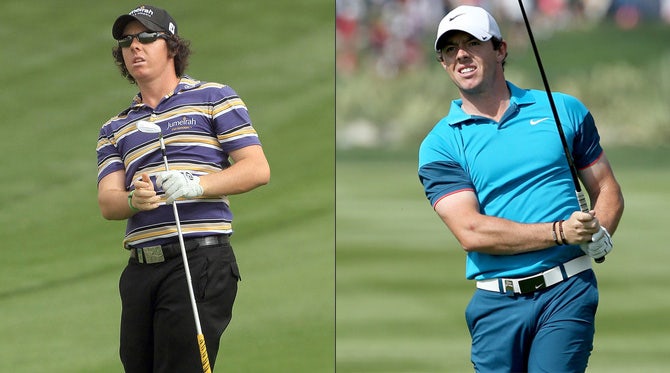 Transformations in Golf - Then Until Now

Transformations in Golf - Then Until Now

For a little bit of fun, we take a look back at how some of our favourite stars of the game shaped up five years ago and their transformations to now!

Images circlulating twitter earlier this week actually prompted this entire blog and it really is mesmerising to see the transformation of Rory McIlroy. Ripped and looking sharper than ever in his new Nike 2015 kit, Rory McIlroy is a true athlete and really will inspire a generation in golf.

The 2015 season ahead has already been billed as Rory vs Rickie and we think his transformation is just as outstanding. From a youthful, fresh-faced 21 year old clad in brightly colour blocked Puma to a sophisticated, stunning golfer with a new look for 2015 - Rickie is idolised by many youngsters and quite rightfully so.

Martin Kaymer hasn't changed much over the last five years but a new contract with Hugo Boss turned his style around, for sure. Possibly the best dressed golfer on tour in our opinion!

Going back longer than five years for Bubba with this almost unrecognisable 2007 image. Such an ill-fitted shirt too, we are more than happy to see Bubba Watson looking sharp in Oakley these days!

Billy Horschel looks like a man, now. Your FedEX champion has the ability to grow some facial hair these days and that means he doesn't need to carry his driver's license everywhere any more!

And finally, perhaps our favourite transformation of them all. From comical in 2002 to the coolest man on tour in 2015 - it's Mr. Rioja himself.