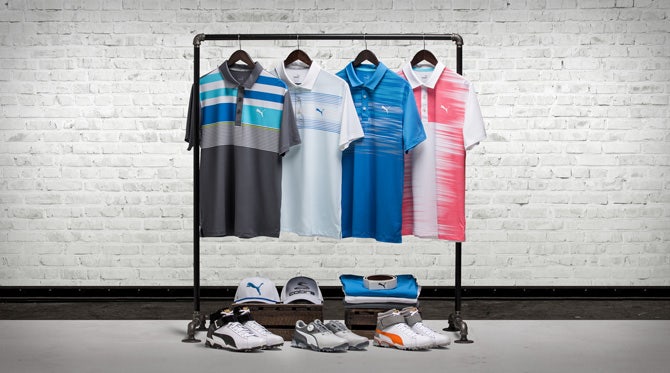 Puma Golf have unveiled the Rickie Fowler Players Championship 2017 scripts including a dedicated PINK OUT Sunday outfit which is sure to catch the eye...

The Players Championship 2017 will take place at TPC Sawgrass once more and the champion of two years ago, Rickie Fowler, will showcase flagship styles from the latest Puma Golf collection for SS17. The first three days will feature a predominantly blue theme with some key styles of Puma footwear also on show, whilst Rickie will also celebrate #pinkoutsunday to celebrate Mother's Day and support the DONNA foundation - a breast cancer charity in the US.

Thursday's look for Rickie Fowler at the Players Championship will feature the Road Map Asymmetrical polo shirt in Quiet Shade grey, complete with two shades of blue in the panel detail at the chest. This polo shirt will be paired with white Puma Golf trousers to complete the look; a style of pant which we firmly believe is one of the best ever in terms of quality, value and performance.

The Highlight Stripe polo shirt will make its first appearance in a PGA Tour event with Rickie Fowler wearing the white/french blue colour on the second day Friday at TPC Sawgrass. Rickie will pop this outfit with the matching French Blue Tailored Tech pants and Puma Golf shoes - which are scripted to be the Puma Golf Disc shoes in grey violet.

The "uncamo" print has been a popular style this year and we love this particular colour of polo shirt which will be worn on Saturday at the Players Championship. Rickie Fowler will keep the rest of the outfit clean and simple with a pair of grey pants and Puma Golf shoes completing the look as below.

"Pink Out Sunday" has become a popular tradition at the Players Championship and is promoted to both celebrate Mother's Day in the United States and support the breast cancer charity, the DONNA Foundation, at the same time. Most players will incorporate a pink element into their Sunday outfits and Rickie Fowler will swap out his tradtional Vibrant Orange Sunday look for Bright Plasma Pink - with the eye catching Frequency polo shirt becoming the star of the show.

Click here to shop all of the Puma Golf clothing which Rickie Fowler will wear at the Players Championship in 2017.