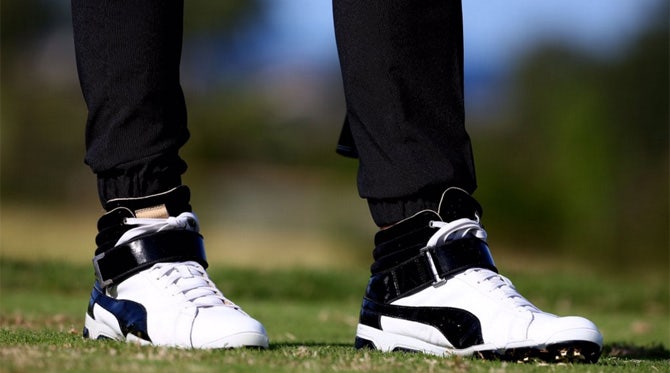 Rickie Fowler secured his first win of the season in Abu Dhabi and the victory further fuelled the debate surrounding his new Puma look. Here's our style editors' take on those Rickie Fowler High Tops and cuffed pants at the centre of it all.

It was at the start of the year when we first saw Rickie Fowler rocking a new pair of golf shoes on the golf course - but it wasn't the style any of us were expecting to see. A pair of lifestyle Puma high tops with a bold velcro strap, engineered with the outsole of a golf shoe. We've all seen the paradigm shift towards far more casual looking trainer styles of golf footwear, but this took that trend to a whole new level.

People worked up over @RickieFowler golf shoes makes me like them and him even more. Don't be afraid to be you. — HackerFarr OIIIIIIIO (@GO_FARR) January 8, 2016

Then we noticed these shoes weren't just intended for Rickie's practice rounds; different colours of the Rickie Fowler High Tops appeared on each day of the Hyundai Tournament of Champions and were matched with a pair of cuffed pants in a jogger silhouette. It was a fresh look and one which definitely appeals to a younger audience, though the wider opinion was hugely divided from the very beginning.

It's different, it's a little outlandish, it's like nothing we've seen before - but as a look, we actually really like it. A clean silhouette with a very modern edge - but that opinion is definitely not shared by everyone. You either love it or you hate it, but every one has an opinion and that's what defines a great look for us.

Going through the social commentary surrounding the look, it would appear that two key elements are what swings the pendulum of opinion: the cuffs on the pants and the oversized Velcro strap on the shoes. That's fair, but we think the look will appeal to so many more stylish golfers if we replace the cuff with an upturned hem, for example, and remove the strap from the shoe and introduce a regular, more commercial high top style. As for the availability of the Rickie Fowler High Tops for consumers - no concrete information from Puma as of yet. However, a personal note from head designer of Puma golf footwear, Grant Knudson: "Stay tuned. Everything will be OK..."

Trends in golf wear are typically more confined to "just golf" - last year it was greys and monochrome which peaked at the Open Championship, whilst quilted jackets were another popular trend and soon came on offer from almost every brand. But these trends move in exceptionally slow cycles; we first saw the demand for quilted front jackets spike at the Ryder Cup at Gleneagles and two years later, we're still seeing quilted fronts throughout the Autumn/Winter 2016 ranges. Fashion trends, generally speaking, don't cross over into our industry. Until now.

In full support of the high tops & joggers. How many kids wear orange because of @RickieFowler? He brings great talent & edge to the course

It's a casual fashion trend which Rickie Fowler has dared introduce into golf - and we must thank him for it. He's set out to prove that golf fashion is moving forward and can be different. He's set out to showcase his own individuality and fashion sense. He's set out to question the limitations and restrictions imposed by the professional tours and it looks like it might just be working - just last week we had the European Tour commit to relaxing the rules on professionals wearing shorts for their practice rounds. These debates have only just been ignited and they're not going to diminish any time soon; certainly not until the Masters is over at least.

Rickie Fowler won in Abu Dhabi wearing his Puma high tops and cuffed joggers look and, in turn, introduced it to the masses. We must also remember that Fowler has a loyal fan base, full of a younger generation of golfers, and it is somewhat inevitable that this trend is going to stick around. He's pushing the boundaries and he's got the world talking about our sport, daring to be different and question authority. He continues to spark interest in the youngest among us and he's making it cool to play the game. We owe a lot to him and, even if you don't like his new look, you need to doff your proverbial houndstooth flat cap to him regardless. In the words of Rickie Fowler himself - let's #GrowTheGame.

Stay tuned to the Golfposer eMAG for news on availability on the Rickie Fowler High Tops and joggers. 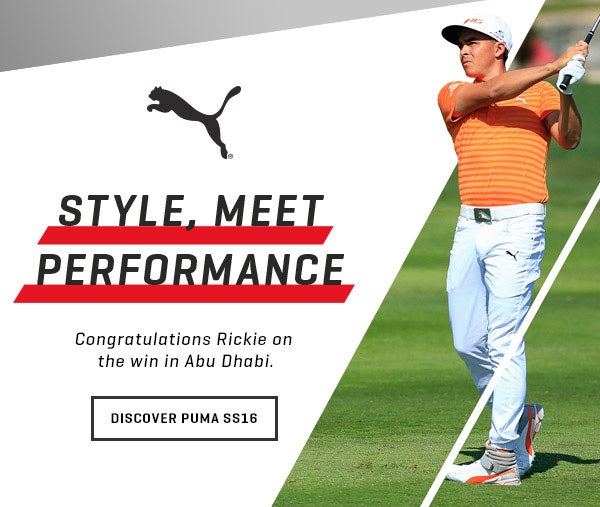