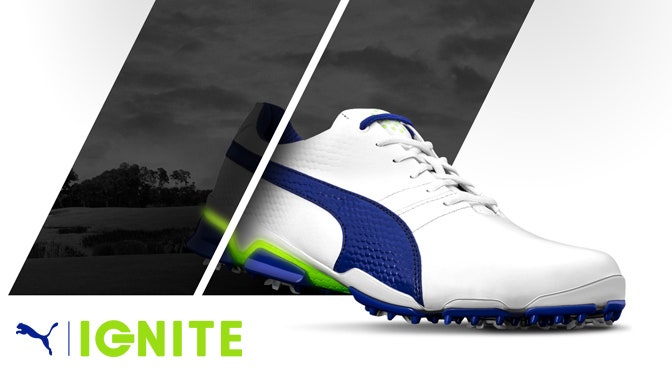 The day has come - Puma have launched the new TitanTour Ignite golf shoes for 2016!

Puma golf have officially unveiled their new flagship shoe style for 2016 - the TitanTour Ignite. It wasn't necessarily the best kept secret in golf after that special cameo appearance at the President's Cup earlier this month, but the launch of this latest Puma Golf shoe will certainly capture the interest of fans across the world.

As the name suggests, the new release is an updated version of the original Titan Tour golf shoe - a style which drew praise from across the board with countless positive and adoring reviews from golf writers and regular consumers alike. The Titan Tour was revolutionary in its own right - it featured with technology developed by NASA and was billed the "coolest shoe in golf"; but now we have something even more advanced, something even more revolutionary and something which just be even more popular than its little brother.

The shoe's release has caused so much hype already but, like you, we are consumers too. So, naturally, we had some questions which needed answering. 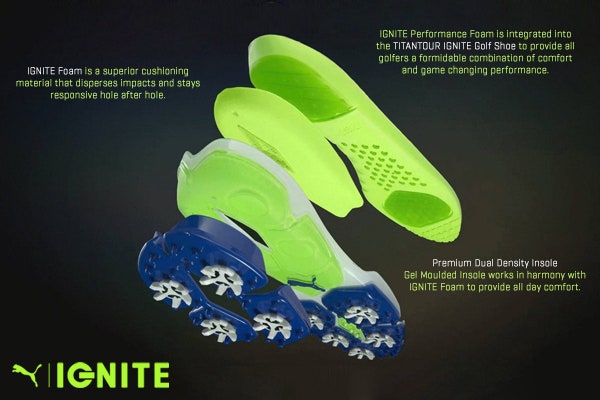 So what makes the TitanTour Ignite any different to the original?

Well, it's all in the cushioning this time around. IGNITE itself is the name of said revolutionary cushioning technology and offers "energy return, responsive comfort, optimal rebound, stable cushioning and superior step-in comfort" according to the brand. What does this mean? It means that the Puma Ignite golf shoes are like nothing you will have ever felt on your feet before - certainly not on the golf course. 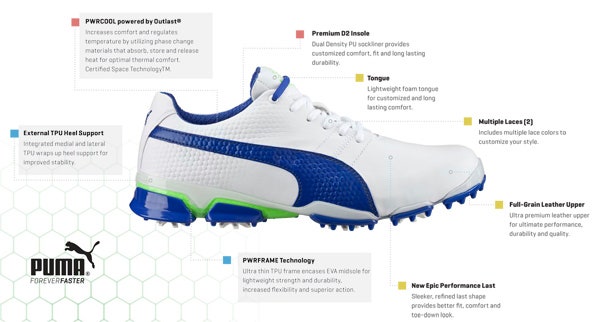 Then, which elements of the Titan Tour remain?

Everything remains, but everything has also been vastly improved. The Outlast technology now features additional PWRCOOL temperature regulation; the low profile cleats now feature an additional stealth cleat for better traction; the leather upper now features a pigskin lining for increased durability and more reliable waterproofing. A new "Epic Performance Last" was used in the development and a new Duoflex outsole offers improved flexibility and movement during the swing. Even the new formstripe looks a lot better on Puma Ignite golf shoes - and who would have ticked that box in their Titan Tour "room for improvement" review? 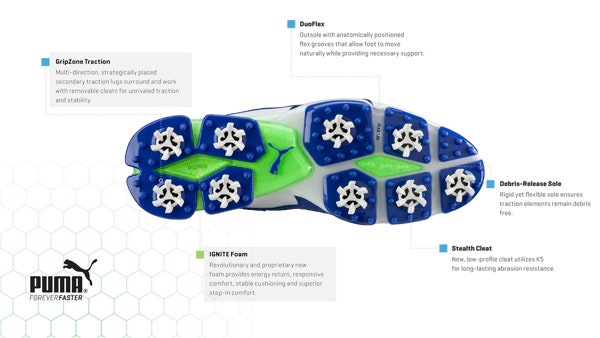 But if it has the same name - it must be the same shoe, right?

Perhaps in theory, but no. We like to think of comparing the original Titan Tour and the TitanTour IGNITE as how you might compare an Aston Martin DB7 against the Aston Martin DB9. The Titan Tour was good, but the TitanTour Ignite is far superior in almost every department. That's from the aesthetics to the internal technology, from the engineering to the comfort and performance you feel on the course.

The colours! Of course - we have the traditional white/orange as we've already seen Rickie wearing on the PGA Tour. Then we also have a variety of whites with blacks and blacks with whites for a more classic look, whilst a fresh White with Surf the Web blue and Gecko Green is perhaps the most striking of all and the one which is set to feature with some prominence in 2016.

As we're sure you will agree, the TitanTour Ignite takes the style appeal of the original Titan Tour to that next level. A sleek design with a stylish toe-down look is notably different, whilst the overall look is definitely one which will appeal to golfers who have never invested in Puma shoes before. The colour schemes allow for that investment, too - each selected for their aesthetic appeal but also their versatility to wear with a range of outfits.

There's something else a little bit special which is also set to arrive in 2016 - the Puma TitanTour Ignite golf shoes with premium leather upper. Two key styles of this shoe will be entirely exclusive right here at Golfposer, as has become tradition, meaning you won't be able to find these colours anywhere else in Europe.

Another new colour way, which is sure to instil a sense of desirability, feature this soft premium leather upper; Drizzle Grey - Gecko Green. The best way to think of these exclusive Puma Ignite golf shoes would be in the same way you might add a luxurious leather trim to that new DB9 we were all sold on earlier. Premium. 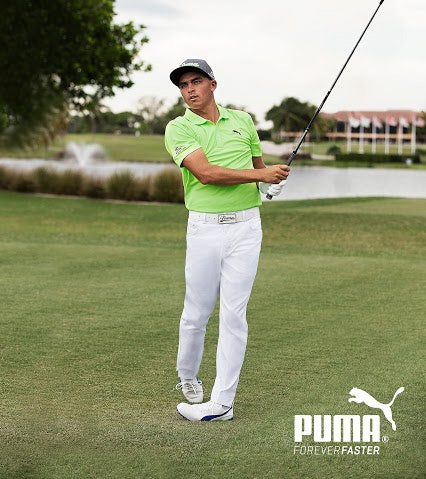 There you have it - the Puma TitanTour Ignite golf shoes. You can already see Rickie Fowler wearing the new style on the PGA Tour but also stay tuned for the launch of our next Test Pilot mission - where one lucky Puma customer will get the opportunity to test them out and review the Puma Ignite golf shoes for themselves, even before any one else has the chance!

The Puma Ignite golf shoes will be available for purchase online at Golfposer in early 2016 - if you can wait that long.