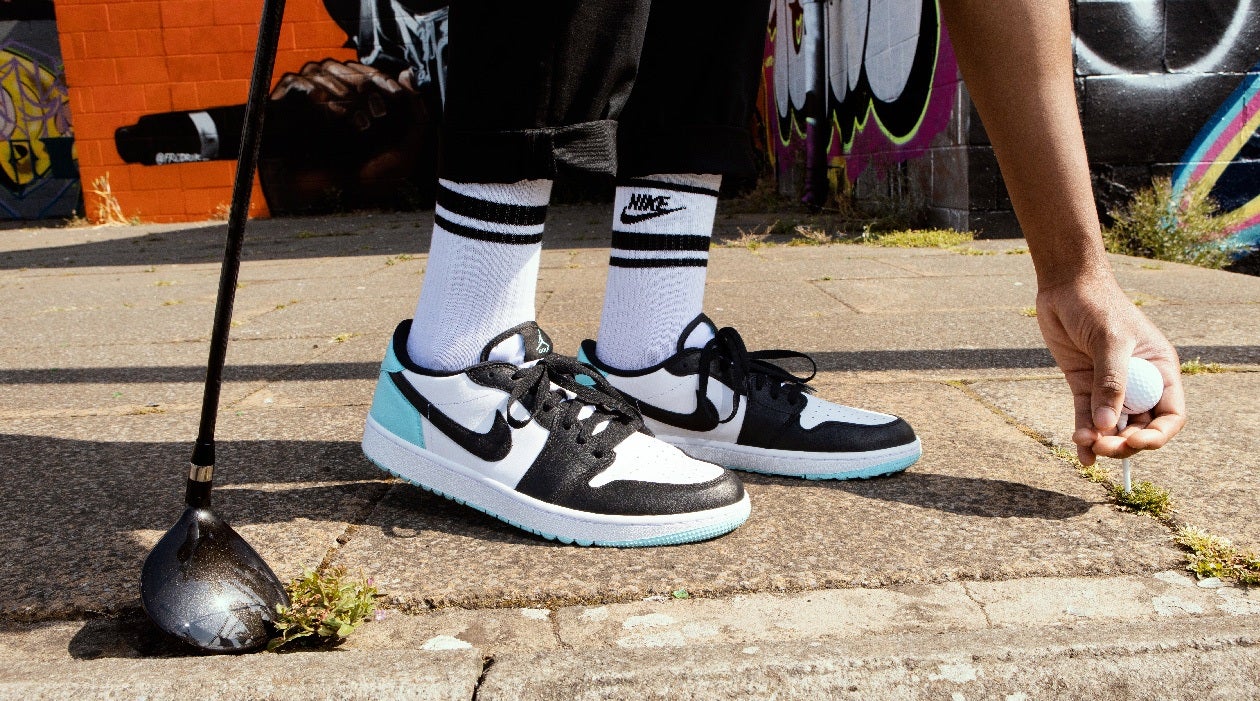 We've got everything you need to know about the Nike Air Jordan 1 golf shoes with upcoming drop dates, product images & more.

The spikeless Nike Air Jordan 1 golf shoes are one of the most anticipated footwear releases in the history of golf and we already know that four colour options have been confirmed for 2022.

The four different colours will all drop on different dates, so be sure to keep checking this page for Air Jordan 1 golf shoe drop dates & release information throughout the year.

So, why are the Air Jordan 1 golf shoes in such high demand?

Well, first of all, it's the very first spikeless Nike golf shoe based on a "retro" Air Jordan sneaker. Sure, other spikeless Nike x Air Jordan shoes have come and gone, but never a style which is a true reflection of a classic silhouette.

The Air Jordan 1 Low G boasts a stitch-for-stitch reconstruction of the original AJ1 upper and is one of the very reasons why both golfers and sneakerheads have tuned in.

That design feature coincides with the introduction of a spikeless outsole which has been designed for traction on the golf course, though soft and versatile enough to wear comfortably on harder surfaces.

It even features the same distinctive pattern of an original Air Jordan 1 sneaker in the brand's bid to retain as much of the overall look & feel as possible.

There are other reasons which explain why the Air Jordan 1 golf shoes have peaked interest so high in 2022.

On the golf side, players including Tony Finau, Matt Wolff & Tommy Fleetwood have already been spotted rocking the AJ1 golf shoes on the course in the early part of the season.

On the fashion side, Nike have a recent history of releasing AJ1 collaborations with designers such as the late, great Virgil Abloh, rappers like Travis Scott & fashion houses such as Dior; you may notice that the Wolf Grey colour option is a very close relative of that Air Jordan x Dior collaboration from two years ago.

Meanwhile, on the sneaker side, the Air Jordan 1 is just the embodiment of the word "iconic".

The reasons for that are ten-to-the-dozen and there are many more in-depth articles out there which delve into the history of the Air Jordan 1 better than we ever could.

But whether it's the backstory of Nike's NBA fine-paying on behalf of Michael Jordan, the famous "Be Like Mike" adverts or the pure sneaker nostalgia - almost everyone would agree that the AJ1 is the MVP in the sneaker game today.

For us though, it's all down the the look. Simplicity at its absolute finest; perfectly suited for you to wear on or off the golf course.

If you're lucky enough to get your hands on a pair, that is.