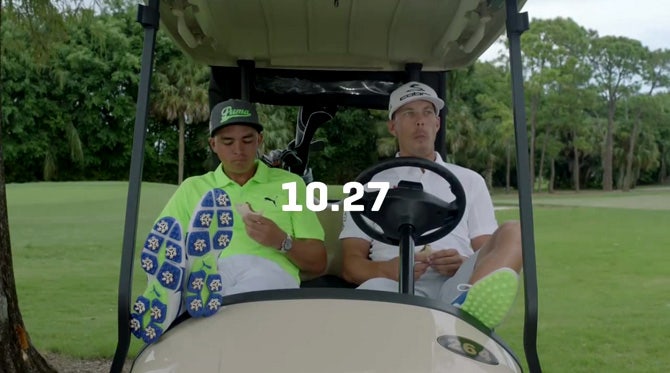 Puma launched a teaser video for the release of the new Puma Golf shoes later in October, whilst Rickie Fowler also appeared to wear something new at the Presidents Cup.

It's that time of the year when all of the big brands begin to launch their new flagship styles for 2016 and Puma Golf were the latest to demand our attention this week. New Puma golf shoes are always guaranteed to stir up a frenzy and we already can't wait to see what the new style looks like, but more importantly what it feels like in performance. We have every reason to believe that Puma might just amaze us all once again though, given the huge success of the Titan Tour this season. There's heightened expectation, that's for sure, but also heightened anticipation as of yesterday.

No brand enjoys teasing their loyal followers more so than Puma Golf. A short video surfaced this week and shows Rickie Fowler alongside caddie Joe Skovron, sitting in a golf cart and eating some lunch - but what's that on their feet? Only the new Puma Golf shoes, of course. A definite nod to the forthcoming 2016 collection; that lime green and blue colour way is incredibly fresh and signature Puma.

Rickie Fowler with his eye on the prize at the Presidents Cup pic.twitter.com/7guHts3s4k

As if it were planned with perfect synchronisation, Rickie Fowler appeared on the golf course with a suspicious looking pair of shoes yesterday - coincidentally the same day that the above video was launched on social media. He was playing in South Korea to practice for the Presidents Cup and the shoes he was wearing looked quite stunning, finished in team USA inspired colours of white, red and blue. What's more, the shoes also had a very distinctive Puma look to them...

Is this an insight into the what the new Puma golf shoes will look like? We'll just need to wait and see, but at least we know that the official launch date for the new Puma Golf shoes has been confirmed as October 27th, 2015. The countdown is on.

"Your golf game will thank you," claim the brand - and it would be foolish not to believe them.

Stay tuned to the Golfposer eMAG for news of the latest Puma golf releases and product launches.