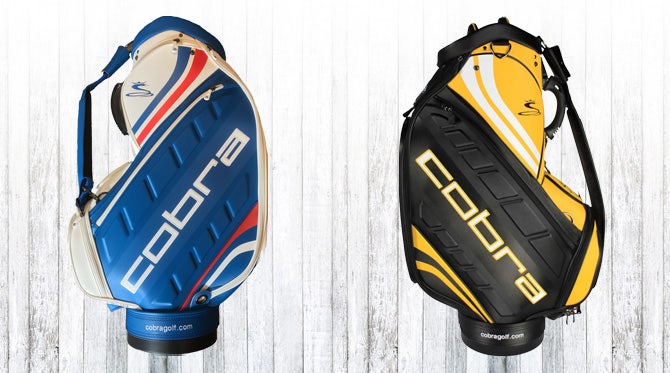 A quick look at the Cobra Major Edition Tour Staff bags which will be used by two key Puma Golf athletes, Rickie Fowler and Bryson DeChambeau in 2016.

The Masters edition golf bag from Cobra Puma Golf pays homage to the iconic Masters green colour with white and gold trim featured for a truly unique finish. As the first from the Cobra Majors collection, these lasted no longer than a matter of days online at Golfposer before they were completely gone - however there was a chance to win this particular bag over on Facebook earlier in the year!

The US Open 2016 took place at Oakmont Country Club, Pittsburgh, and the Cobra Major Edition bag to commemorate the event was aptly finished in the black and yellow colours of the State flag and Pittsburgh Steelers NFL team colours. A unique design and one which certainly proved popular after Rickie Fowler and Bryson DeChambeau were seen using the bag throughout US Open week.

The Open Championship 2016 will take place at Royal Troon in the middle of July and to mark the 145th Open, Cobra Puma Golf have launched this stunning blue, white and red tour bag to link with the emblem colours of Royal Troon itself. An effective colour combination which certainly has an aesthetic appeal, but this Tour Staff bag is also entirely practical with several pockets, a matching rain hood and robust, reliable design.

The Cobra Puma staff bag to commemorate the final major championship of the year will be launched online at Golfposer in due course. Stay tuned for this one!