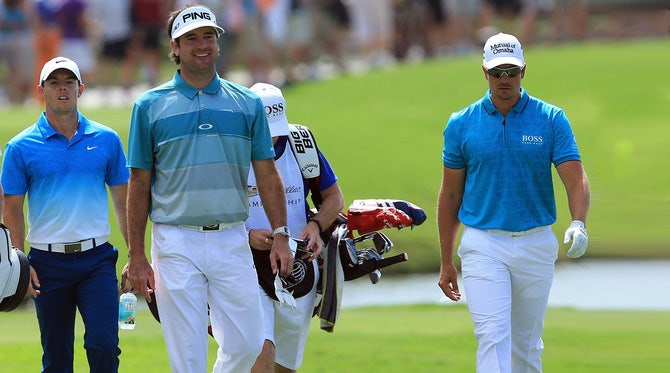 We feature some of our favourite looks worn at Trump Doral for the WGC Cadillac Championship this week!

Rory surges back to the top of our style blog with a great look from Nike - featuring the Major Moment Vapor shirt in grey/pink. Another great round at the WGC Cadillac Championship 2015 followed 'that' frustrating moment at the 8th hole on Friday and only proves his passion, determination and desire to succeed in our opinion! We wouldn't recommend throwing your Vapor clubs in the water though, they're actually pretty good.

Bubba looks to be regaining some form just in time for his favourite event of the year, which takes place next month if you hadn't realised already. A Masters inspired look at Trump Doral, Bubba?

Henrik Stenson was in the top-billed group with the other top two players in the world, but Henrik blew them away in the style ranks for sure. The new Paddy Pro 5 and the Prek Pro feature with Stenson looking sharper as ever!

...and Martin Kaymer once again. The Paddy MK 1 shirts will be a consistent look on your screens this year - but we certainly won't tire of seeing Martin wearing this particular style.

A note for new Hugo Boss signing Victor Dubuisson, too. Not wearing any of the very latest Spring range as of yet, but it won't be long. A well-liked character and sure to be an excellent ambassador for Hugo Boss in years to come!

Rickie Fowler looks like he has been practicing his modelling not only for on the golf course - but on the red (or grey) carpet this week! Clean, sharp and sophisticated looks both on and off course for Rickie at Trump Doral.