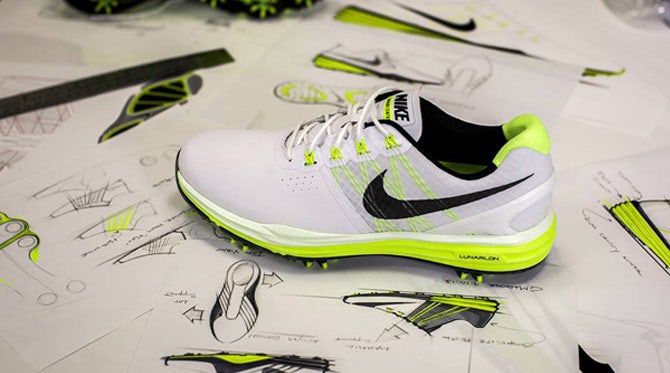 Rory McIlroy took it upon himself to launch the Nike Lunar Control III golf shoes via an Instagram post just before the season-ending DP world championship in Dubai and stirred a frenzy amongst loyal Nike followers across the world. Quite rightly, too; the third edition of the Lunar Control is a quite stunning golf shoe and our attention was already encaptured even before delving into the technical details.

Firstly, a little bit of background. With media analysis of the Rory McIlroy swing and his unique style of play having multiplied incredibly in 2014 with his monumental success, we are all fully aware of the importance of power for his game and as a result, Rory offered to work in close cohorts with the Nike design team in order to develop a shoe which was specifically catered to his game and that of other similar 'power golfers'. Challenging the shoe designers to come up with new technical details to improve traction, stability and control - it has been reported that Rory also gave consistent feedback throughout the design process until he was happy with the final outcome.

Ultimately, Rory wanted control 'from the ground up'. Less slipping, greater traction and the ability to generate as much power and speed in the swing as possible were additional requests - and the Nike shoe developers have duly delivered. Key features of the Nike Lunar Control III include:

But, what is this Nike Flywire technology? According to Nike, the strategically placed filaments function in a similar way to cables on a suspension bridge; maximum support is offered by a minimalist structure. A super-lightweight design which does not sacrifice the required support is the result, whilst the Flywire technology has also been specifically targeted in an area which requires the most support for power golfers. Nike Golf's Innovation Design chief, Carl Madore said, "With Rory, he creates so much torque that we are leveraging the Flywire in the midfoot to contain his foot. It is basically the symbiotic relationship between the outsole and the Flywire that is the key to the whole design of the Nike Lunar Control 3".

A final point to note is the material composition of the upper - a synthetic microfibre leather which provides a 2 year waterproof warranty and comfort straight from the box, whilst durability has also been improved upon. The design itself is distinguished and iconic with the Flywire cables and signature Nike Swoosh, whilst no less than five colour ways are currently in production - all of which have already proven to be a real hit amongst Nike's athletes, dedicated followers and critics alike.

It is not often that we see a professional tour golfer do more than just wear what's given to him but it is clear to see how involved and how dedicated Rory McIlroy is with the Nike brand. "The Ultimate Lightweight Performance Golf Shoe" was the target; and we think Nike Golf have just set the highest benchmark for many years with the Lunar Control 3.

You can now PRE-ORDER the Nike Lunar Control 3 golf shoes online at Golfposer. The iconic White/Volt colour way is guaranteed for Christmas delivery, whilst three other colour combinations are available for delivery at the start of January. A fifth colour way (white/blue) will be available in March 2015.