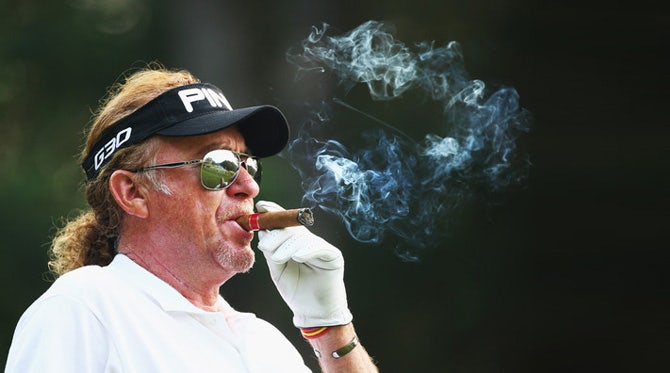 One of the most popular and charismatic golfers from the last twenty years, Miguel Ángel Jiménez is well known for many reasons aside from his on-course performances. From his iconic curls and blonde facial hair to his excessive cigar smoking between shots, from his love for a large Rioja to his weird and wonderful yoga stretching on the practice ground, this Spaniard has won the hearts of many golf fans and fellow professionals with his endearing personality and continues to attract a mass following wherever he plays.

Miguel Angel Jimenez has also enjoyed huge success on the European Tour, winning no fewer than 21 times. Six of these wins even came after his 45th birthday, proving that golf is not just dominated by the bright, young and athletic professionals of the game today. His most recent European tour victory came back in 2014 at his home event, the Open de España at the 27th time of asking, whilst Jiménez has also secured two victories on the Champions tour this season.

Jiménez holds the European Tour record for the oldest victor, whilst he has also participated in several Ryder Cups with four appearances and two subsequent roles as vice-captain in 2012 and 2014 - winning on both occasions. But what is the secret to his longevity?

"There is no secret," Jiménez responded, "Good food, good wine, good cigars and some exercise!"

Jiménez has worn Nebuloni golf shoes since the very early days of his career after forming a close friendship with Gigi Nebuloni – a Milanese shoemaker. These luxury golf shoes are hand-crafted at a rate of just five pairs per day and use only the highest quality leather to ensure maximum comfort. A lesser known brand in the game today, perhaps, but that certainly doesn't subtract from their timeless style appeal and expert craftsmanship.